Our most popular recent blog entries have been the articles relating to issues on:

Our Pension Calculator also includes an estimate of how much age pensioners may gain/lose come Jan 2017 - remembering that these changes are not grandfathered or tapered.

So let’s combine all the above and update the situation whereby a home owning couple can have combined earnings of approx. $53,000 pa.

First though we should explain that with respect to deemed income: 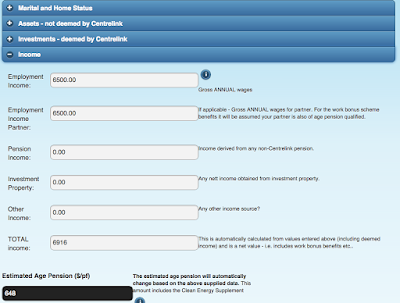 In our pension calculator we enter the home owning couple as having $250,000 in deemed assets - e.g. bank accounts - and each age pensioner having $6,500 per annum of wages.

Now scrolling down the calculator you will see that the pension calculator also shows that in 2017 there is estimated to be no changes to those pension entitlements.

Now the 2017 pension changes increase the lower assets test threshold - the level before there is an impact on the pension. So let’s increase the couples assets by doubling their deemed assets - such as bank accounts, or super - to $0.5 million.

Here you will see that there is only a combined $400 annual loss in pension entitlements between the current situation and 2017. The couple would still be achieving a total ‘income’ of more than $53,000 pa. This is comprised of $12,802 each for the age pension, $6,500 each in wages, and now $15,401 in other income sources - such as deemed income.

In the above scenario the $0.5m in assets meant that the age pension was a ‘asset based’ pension. So if one age pensioner stops work then there is no change to the age pension. The couples total annual income therefore drops by the $6,500 'lost' wages.

4. $0.5 m ‘in the bank’ one partner stops work and the other doubles their wages.

In this scenario the couple may say “my partner has stopped work so I will earn 'their' wages”. That partner then earns an annual wage of $13,000.

Now the couple will only get the benefit of one Work Bonus Scheme credit of $6,500. However as the pension is still an asset based pension there is no change to the total income as shown in 2 above - that is, more than $53,000 pa for all income sources.

Our blog on periodic work provides another explanation of the situation.  However, let’s assume here that the one working partner is earning the above annual $13,000 but these earnings are over 4 periods of work. For simplicity we will say 4 days a week at $200 per day, for 4 weeks, for 4 periods  during the year. Or in Centrelink fortnightly terms 8 fortnightly periods.

If the earnings were equally spread over the full year then each partner would be entitled to same as above with no change to the total income situation. These fortnightly age pension payments are shown as Pension A in the table below. 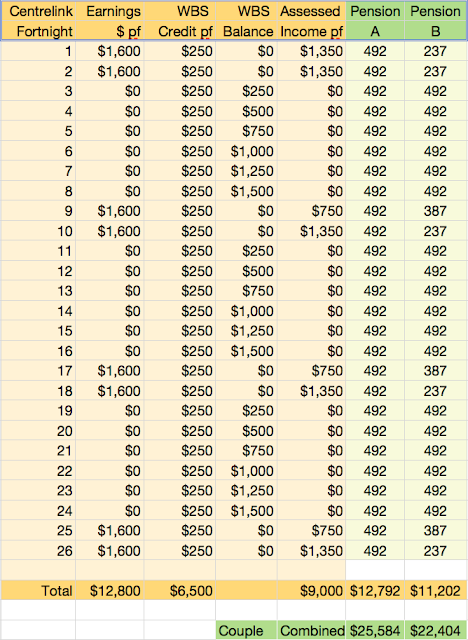